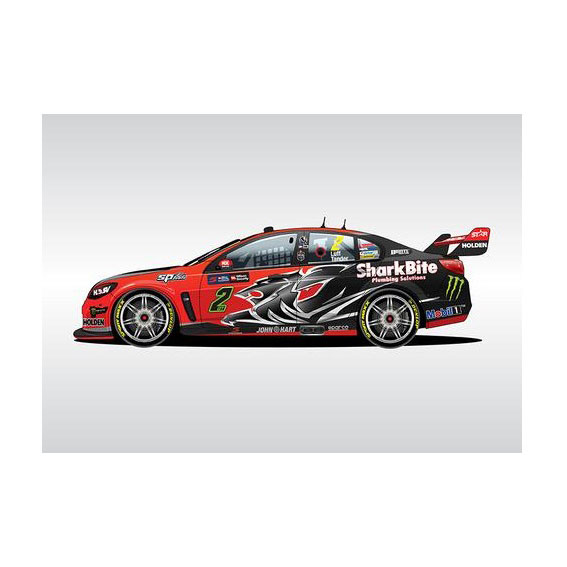 Only 2 left in stock

In what was perhaps the biggest news to come out of the 2016 Supercars Championship season, Holden announced that it would no longer be supporting the Walkinshaw Racing run Holden Racing Team in 2017, instead opting to send its funding and the ‘official factory team’ title to the Triple Eight Race Engineering run Red Bull Racing Australia. It was a move that created mass headlines and significant backlash from the HRT faithful but at the end of the day the deal was done and there were still races to contest for the remainder of the 2016 season.

The Wilson Security Sandown 500 was one of those races. Dubbed the ‘Retro Round’ by the Supercars body, many teams up and down pitlane embraced the history of the sport or their teams by running retro styled liveries or uniforms. HRT bucked the trend and arrived with the same livery they had run all year, clearly opting to focus on their results on track rather than the celebrations around it. It worked.

After starting the race in P2, Tander and Luff took out the iconic race with the front guard of their car hanging off and Red Bull Racing Australia’s Shane van Gisbergen finishing fast, closing the final gap to 0.34 seconds. The win added a Sandown 500 victory to an already long list of achievements for Garth Tander and history will show that the result would also mark the last win for that era of the Holden Racing Team, a fitting finish given only Mark Skaife represented the team more times than Tander.

Produced in die-cast and presented in our clear acrylic display case, this model will be made in an exclusive limited edition with a numbered certificate of Authenticity. It’s one that shouldn’t be missed by any Holden Racing Team fan.

Only logged in customers who have purchased this product may leave a review.